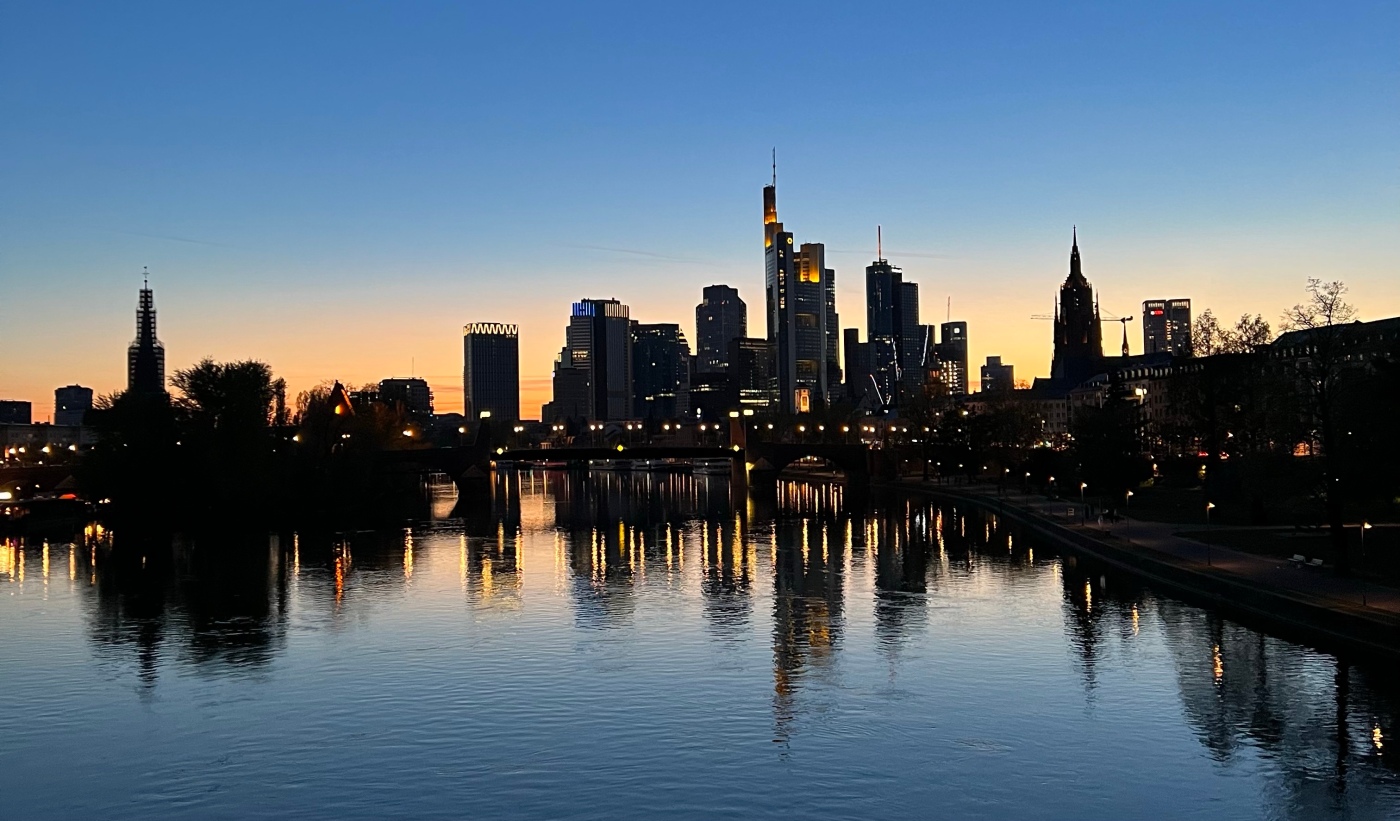 I’ve spent years telling you how great life in Frankfurt is. So when I read that my beloved home abroad was ranked second worst city to live for expats in a survey – better than Johannesburg but not as bad as Paris – I was shocked to say the least. Especially as the number of non-Germans that move to Frankfurt is increasing year on year.

The InterNations Expat Insider had responses from around 12,000 participants of 177 nationalities on living and working away from home. I lowered my head with agreement when I saw that Frankfurt scored so low in the pivotal categories of Digital Life (47th), Language (46th), Admin Topics (45th), and Housing (43rd) out of 50 cities.

Considering that Frankfurt is revamping its city centre and building new skyscrapers quicker than you can say ‘vertigo,’ the InterNations survey has not positioned Germany’s finance hub as the attractive metropolis that it would like to be.

So, I’ve done some snooping to share what made Frankfurt drop from #26 in 2021 to a shocking #49 in 2022, shed some light on the EIU Global Liveability Index 2022, where Frankfurt contrarily ranked 7th place worldwide, and of course wrap up by telling you what, in my humble opinion, does indeed make Frankfurt a special place to live.

I share tips on how to learn German because it’s a challenging language. However, from my experience, I don’t think it’s the language itself that makes settling in Frankfurt difficult. Instead, I’d say it’s expats’ expectations of Germans’ use of English.

Imagine this: you move to a country where 56% of the population speak English, and a city where English is widely the primary business language. When it comes to language,you’re fine at work, but once you step out of this safety bubble life starts to get difficult. English is not used as commonly as you might think because for most Germans, English is a second language that is learned later in life, instead of a native language people grew up with at home. Whilst Germans generally speak very good English, Germany ranked 10th place in the Education First English Proficiency Index, compared to the Netherlands that ranked 1st place.

It’s worth noting that according to survey respondents, “7 out of the bottom 10 cities in the Ease of Settling In Index are located in Germany, Austria, and Switzerland. Aside from the bottom 3 — Frankfurt (48th), Hamburg (49th), and Vienna (50th) — expats in Basel (42nd), Zurich (43rd), Munich (44th), and Dusseldorf (45th) find it difficult to settle in as well.”

The difficulty in settling into German-speaking countries may reflect their individualistic, rather than collectivist, culture. This means that finding social circles with locals is not usually easy for newbies and people are often perceived as cold and unwelcoming.

It’s a big contrast to other cultures such as countries in Latin America and comes as no surprise that Mexico City ranked #1as place most easy to settle. Respondents were extremely satisfied with the friendliness of locals and their social lives.

The expat survey shows a big part of settling into a city is being able to get things done quickly and easily.

At this point ladies and gentlemen, I announce that Germany likes paper, the complete opposite of quick and easy. Despite higher acceptance of card payment since the pandemic, it is still quite normal to have to pay with cash in some restaurants and Apple pay is certainly not an option when jumping on the train.

This reflects why a high 37% of survey participants in Frankfurt were unhappy with the option (or lack thereof) to pay with card or phone, compared to 8% globally.

In the European Commision Digital Economy and Society Index 2022, Germany ranks 13th of all 27 EU countries for IT innovation – pretty shocking of Europe’s leading economy, especially for expats who move there.

Digitalisation would be a game changer for bureaucracy in Frankfurt. I won’t take you through the painful journey of obtaining my permanent residency permit post-Brexit, but what I can tell you is that I was one of the lucky ones who lived in Germany before the UK officially left the EU – so mine was the ‘straight-forward’ version. Even that, I wouldn’t wish upon anyone.

“Why was it so difficult?” I hear you ask. Well, the instructions are always unclear. What you’d think would be a time-consuming but straightforward fix, has for some miraculous reason never materialised for German bureaucracy. When getting my permanent residency, I even double-checked with the woman at the Ausländerbehörde (foreigner’s registration office) if I had missed the section on the website that mentioned that I in fact didn’t need to print the 2cm-thick wad of paperwork that I’d brought with me. She confirmed that the instructions I received were misleading.

Believe it or not, digitalisation makes bureaucracy more accessible for expats. It would make every expats’ life easier if the never-ending forms were accessible online, and even better if they were available in English too. Germany’s bureaucracy really needs more efficiency.

There is a lot of admin to be done when moving to Germany, which although time-consuming, would be much more widely accepted if you could complete more of the documentation from the comfort of your own phone or laptop, rather than needing a pen, paper, envelope, and perhaps a stamp. If given the option to have assistance when arranging your administrative tasks in Frankfurt, take it – you’ll be thankful.

As a London native, I must say that my perception of house pricing is somewhat warped. Whilst I am aware that Frankfurt’s housing market has risen in the six years that I’ve been here, the prices are still significantly cheaper than London.

Saying that, London ranked 49th for house pricing in the InterNations survey and Frankfurt came in only 8 places behind (41st), so perhaps there’s not much difference after all. Also, Frankfurt is one of the most expensive cities in Germany to both rent and buy.

Almost 40% of Frankfurt participants had senior or specialist jobs, compared to 29% globally. And 11% of global participants earnt between USD 75k-100k, but the percentage was much higher in Frankfurt at 23%. Despite the higher incomes and flashy job titles, Frankfurt still ranked very low (41st) in the Personal Finance Index, which reflects how far real wages stretch, especially in the current climate.

To top it off, finding housing has never been easy, which seems to be the case for 70% of Frankfurt participants compared to 43% globally. That’s why I created this guide on how to find an apartment in Frankfurt.

But it’s not all bad for Frankfurt. In fact, the Economist Intelligence Unit Global Liveability Index 2022 puts Frankfurt centre stage. All 173 cities are ranked according to stability, healthcare, culture and environment, education and infrastructure.

It’s important to mention that many eastern European cities were low in the ratings because of Russia’s invasion of Ukraine. Even so, Frankfurt came in 7th place, ahead of Toronto and behind Switzerland, and is the survey’s biggest mover of the last 12 months with a huge jump of 32 places! Woohoo! Frankfurt scored 100% for healthcare and 96.3% for culture and environment.

I have lived in Frankfurt for over six years and am convinced that once you take a deep breath and are patient enough to overcome the initial bureaucracy, sort housing and eventually settle, life in Frankfurt becomes somewhat smoother. Yes, they need to get their act together and go digital faster but gaining a basic understanding of German makes daily life easier to navigate. Once the initial frustrations of culture shock are over, you have capacity to enjoy Frankfurt for some of its cultural and environmental pleasures, such as Goethe Tower, the Dialog museum and the day-to-day convenience. Plus, I am looking forward to seeing how the development of Frankfurt’s skyline (and the shops and restaurants that come with it) bring a new burst of energy to the city.

Statistics prove that I’m not the only non-German who chooses to stay in Frankfurt. Overall, the pros seem to outweigh the cons. Despite Frankfurt’s not-always-positive reputation, looking at Frankfurt from a different perspective has made my life here enriching and is the reason that although I planned to stay for three years, I am now half way through my seventh!